The history of Mexican beer is as long as the conquest of the New World. The first brewery was established by the Spanish immediately after the conquest. King Charles V issued a writ in 1542 that allowed for the production of beer in the new lands under the condition that one-third of the revenue was paid as tax to the government. Alonso de Herrera started the first brewery in 1544 which initially found success but eventually struggled to compete against all the local alcoholic drinks including pulque, tesgüino and, eventually, rum and mezcal. Beer production continued throughout the colonial period but never really growing into a serious business due to the large taxes and serious competition.

After Mexican independence, the taxes and government restrictions were lifted or

lost and beer consumption, whether it be imports or locally produced, slowly started to increase. However, they still had to compete with pulque particularly in central Mexico. The early part of the XIX century saw the launch of the Pila Seca brewery in Mexico City which brewed a dark, barley-based beer. Things didn’t start picking up for the beer industry towards the latter half of the XIX century as Cerveceria Toluca was founded in 1865.

Many others followed mostly outside of central Mexico where there was less competition against pulque including Cerveceria Moctezuma ( originally called Cervecería Guillermo Hasse y Compañia after its founder) in Orizaba, Cerveceria Cuautemoc in Monterrey, Cerveceria Pacifico and others in Chihuahua and Sonora. Many of these were founded by the recent immigrants from Bohemia, Bavaria and other beer-producing regions of Europe. This era also saw the production of the first Lagers which, in time, would be come Mexico’s preferred beer type. These companies were all aided by the construction of the railroads throughout Mexico during the Porfiriato which allowed easy transportation of their goods to the big cities.

The 20th Century saw the decrease in pulque’s popularity — some historians say it was due to a dirty marketing campaign by the beer producers that discredited pulque as unsanitary. Whatever the case, at the turn of the XX century, there were approximately one thousand pulquerias in Mexico City and this number dramatically decreased such that, by the 1970s, less than 50 were left. Beer consumption quickly took the space vacated by pulque.

The latter half of the XX century was characterized by massive consolidation as the main two breweries swallowed up all the smaller brands. As often happens, this type of consolidation by the large brands tends to remove creativity and move  these smaller brands from craftiness and artisan towards the industrial. Today, the vast majority of beer production is controlled two mega corporations which are actually part of international beverage holdings: Grupo Modelo (owner by InBev) and Cerveceria Moctezuma (owned by Heineken). The production output of these conglomerates is so massive that Mexico surpassed Holland as the largest exporter of beer. Brands like Corona, Tecate and XX Equis are now exported and household names worldwide.

In the Yucatán peninsula, Cervercería Yucateca had been foun 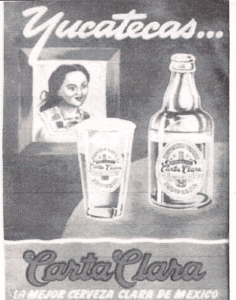 ded by José Maria Ponce Solis in the capital city of Mérida in 1869 (with German equipment and a German brewer). Cervceria Yucateca’s first major brand was Carta Clara. Eventually, they became well known for regional brands such as León Negra and Montejo. However, lack of powerful marketing resources or simply will prevented these brands from achieving national or international awareness much less preference. In the late 1970s, Cerveceria Yucateca eventually sold to Grupo Modelo. The two late popular brands are still available in the Yucatan peninsula but the craftiness of their taste is long gone. In addition, production was consolidated by the large corporate entity and the actual production facility in Merida was finally closed down in 2002 leaving the “Ciudad Blanca” with no local beer.

Enter the craft beer revolution. Much like rock music was democratized in the 1960s by affordable electric guitars and amplification equipment, so did beer production throughout the last decade. This movement eventually reached the 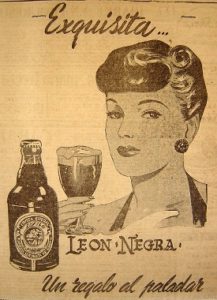 Hermana Republica (sister republic as it is affectionately known) of Yucatán. Tired and bored of the bland tastes employed the large conglomerates and longing for the era in which Yucatán produced beer known for its uniqueness, a pair of entrepreneurs founded Cerveza Patito with the express purpose of creating beer with a decided edge and as a direct affront to large corporate products (Patito is a tongue-and-cheek name for their brand as it is the equivalent of Acme in English).